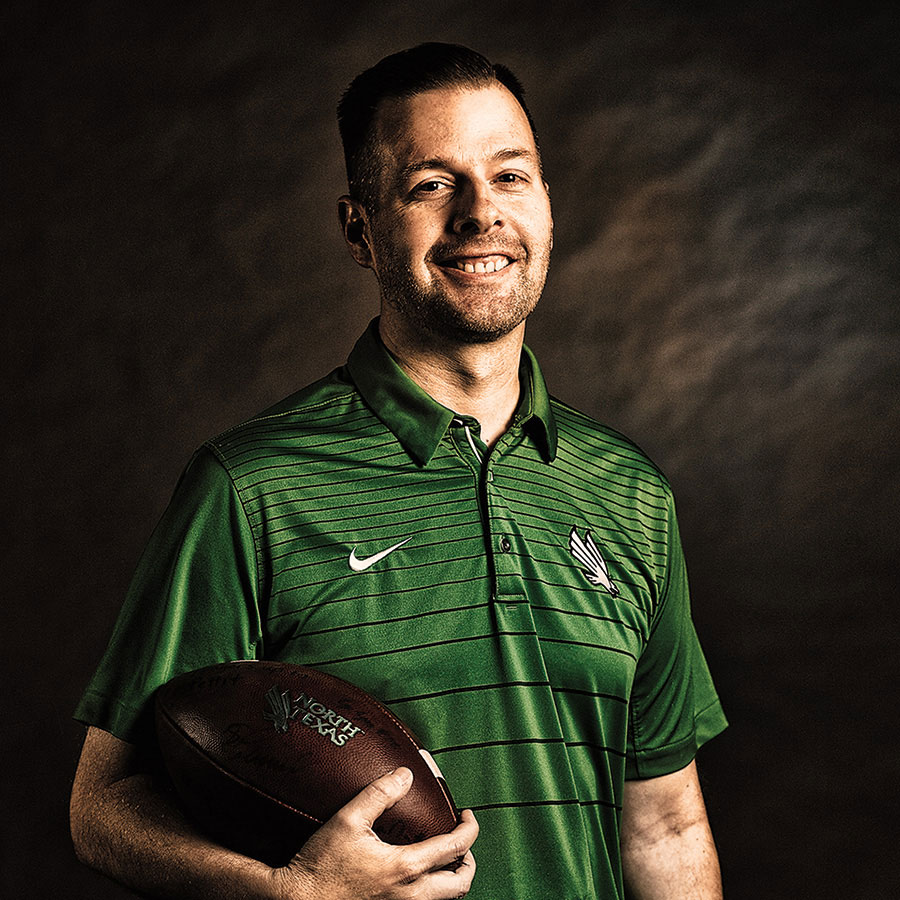 Steven Pettit, long a Mean Green superfan, discovered he had Stage IV esophageal cancer at the age of 39. The UNT football team has rallied around him.

"Will I live long enough to see the birth of my son?"

It's not a question the 39-year-old ever expected to ask. He'd only visited the doctor as a precaution, to make sure his difficulty swallowing wasn't anything serious. "It's likely nothing," he was told. "But let's do a routine diagnostic just in case."

Steven Pettit didn't even make it to the parking lot before his phone rang.

"That kind of news, it just brings you to your knees," Pettit says.

With a 2-year-old son at home and another on the way, he had no choice but to pick himself up. He and his wife, Hillarie ('11), met with an oncologist who offered three pieces of advice: Pray. Do the treatments. See what happens.

Though doctors couldn't guarantee Pettit would be there for the birth of his son, he vowed he would, powering through chemotherapy and radiation that made him so sick he could barely eat or stand. Nearly one year after that first phone call, he received another: His cancer, as far as the oncologist could tell, was in remission.

"We were floored," Pettit says. "It seemed like a miracle."

He made the most of his remission, taking his family on a vacation to San Antonio and to Mean Green events. He filmed messages to his sons, extolling advice on everything from shaving to dating, just in case the cancer came back.

And then, last August, it did.

He took on six more rounds of chemo, and as the two-year anniversary of his diagnosis drew near, underwent surgery to remove part of his stomach and esophagus. In the months since, Pettit's continued to fight seemingly insurmountable odds -- more than 50 percent of those diagnosed with esophageal cancer die within two years -- but he hasn't fought alone. He's found support from UNT, his congregation and, most importantly, his wife and kids.

"I don't know if this is a prayer answered or just kicking the can down the road," says Pettit, who received a clear scan in May. "I've resigned myself to the fact that I probably know how I'm going to die -- it's a little scary to see the path in front of you. Still, you do the treatments even though they're worse than the disease. I will do anything it takes to be there for my children."