Giving faculty and staff an edge 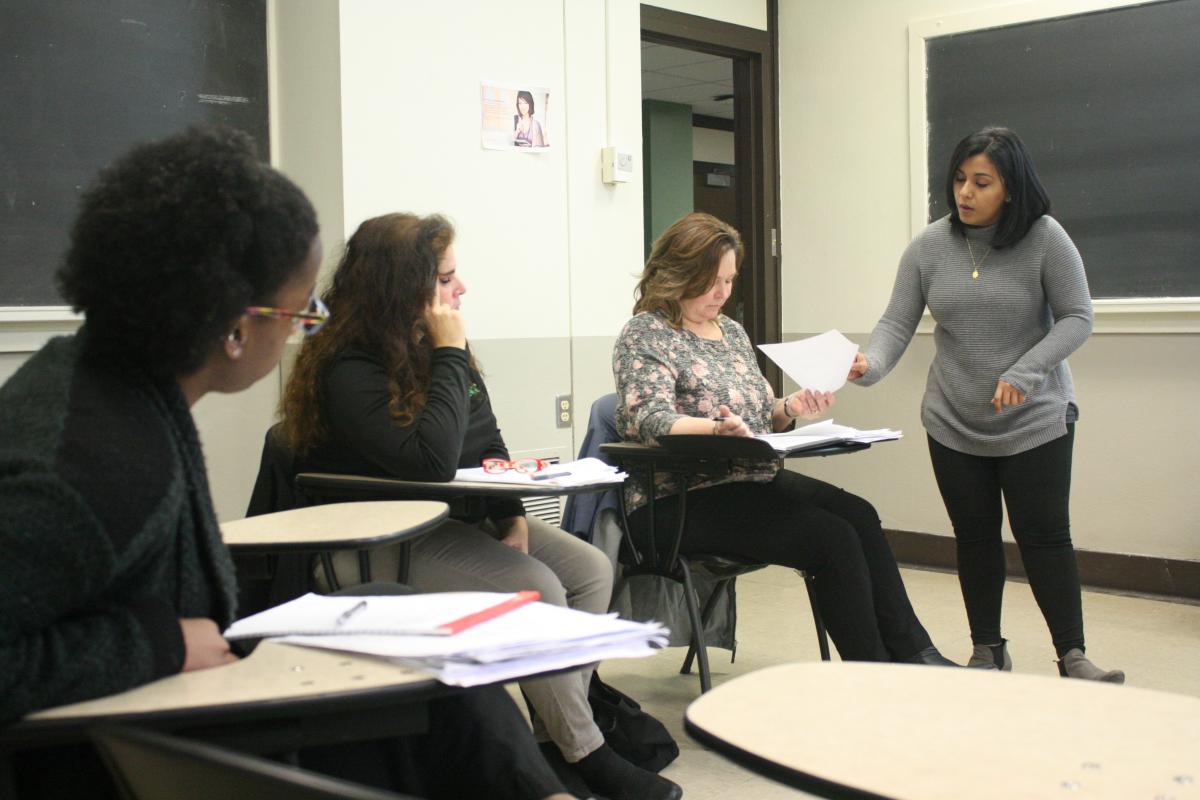 When Jerry Lacey walked into the President’s EDGE office gripping a freshly printed piece of paper, the joy on his face was palpable.
And so was the pride on the face of Kemper Rao.
“You got it!” Rao exclaimed as she offered Lacey a hug.
It was a copy of Lacey’s certificate of high school equivalency, or GED, which he earned at the age of 32 after a year of working with Rao and others at The President’s EDGE. Lacey, a plumber in the UNT Auxiliary Maintenance department, said working with The President’s EDGE tutors was a “confidence builder” and helped him make up for the time he lost after dropping out of school in ninth grade.
“I’m really excited for myself,” Lacey says.
The President’s EDGE — Employee Directed General Education — is a joint initiative of the President’s cabinet and the College of Education, which provides employees support and opportunities for advancement within the UNT community. It opened its doors in the spring of 2011 as a program to assist staff members studying for their high school equivalency certificate.
Rao has served as the program’s part-time director since September 2016. She learned to speak Spanish when she was 10 years old from a neighbor from Cuba and holds degrees in biology and French. She taught school in Louisiana for a time and later worked for U.S. Customs before becoming a stay-at-home mom and moving to Texas.
“I was interested in languages. I like languages. I always have,” Rao says.
After moving to Texas, Rao began working as a substitute teacher for the Lewisville Independent School District, but it was a connection she made while teaching in Louisiana with Rosanna Boyd, director of Bilingual/ESL Education programs in the College of Education, that brought her to UNT and the President’s EDGE.
“The people we serve are staff and employees, not students, but the people who support the students,” Rao says.
Started primarily as a way to assist employees seeking their high school equivalency, Rao says the program began expanding when they realized that many of the people who needed help earning a GED also needed help learning English and computer skills.
“These are people who are cleaning offices and vacuuming the floors, so they never get a chance to use a computer,” Rao says. “They come in early mornings, and we are teaching them how to type and about parts of the computer — job skills they can take forward.”

Tutors at The President’s EDGE include student workers like Crystal Moulden-Lindsey, an undergraduate majoring in linguistics, who teaches an English as a Second Language class.
“We’ve tried to make those English classes relevant to work, so it’s career- or work-related English,” Moulden-Lindsey says. “My goal with the English classes is to learn about my students and show them that there is a way to learn that is accessible and doesn’t make them feel stupid.”
Moulden-Lindsey says the biggest challenge in teaching English as a Second Language to adult learners is the varying levels of understanding the staff members already have. Some may already speak a good amount of English while others may understand only one or two phrases.
“What we’re finding is they’re shy about speaking English — they have a heavier accent and they’re tired of people sitting there and saying, ‘What, what did you say?’” Rao says.
Mary Clavijo Molina is seeking her Master’s degree in Business Administration and works as a graduate assistant in The President’s EDGE. A Colombia native, she says she understands why some native Spanish speakers are shy about speaking English.
“My mom doesn’t speak English because we laughed at her and now she stopped trying. That’s our culture. That’s why we are like that,” Molina says.

In 2017, The President’s EDGE added a Spanish for Staff course. Broken down into eight modules that meet for one hour a week for four weeks, the course is taught at varying times throughout the year. Molina began teaching the classes in the fall.
“I know Spanish, and I like to teach. If someone wants to learn, I like to be that person who teaches them. So this is fulfilling,” Molina says.
The President’s EDGE also offers help with citizenship studies and resume assistance. The program will work to create custom classes for departments and offers a “plus one” option for employees’ immediate family members who may want to join them in learning.
The program is funded through the President’s office and administered out of the Educator Preparation Office in the College of Education. It has a six-member board of advisors and, according to Rao, works to support all staff and employees at UNT, even if their mission still focuses on helping people obtain their GED.
“There’s always more to work through than just information when it comes to the GED. There’s a lot of fears,” Rao says. “You get to deal with the people who slipped through the education system for one reason or another.”