Each spring, thousands of University of North Texas students earn their degrees and become UNT alumni. Every one of them should be tremendously proud of everything they've accomplished in their time in Denton.

In celebration of our Spring 2020 graduates, below are the stories of a few of those freshly-minted alumni who overcame adversity and achieved great things on their way to becoming this semester's Great Grads. 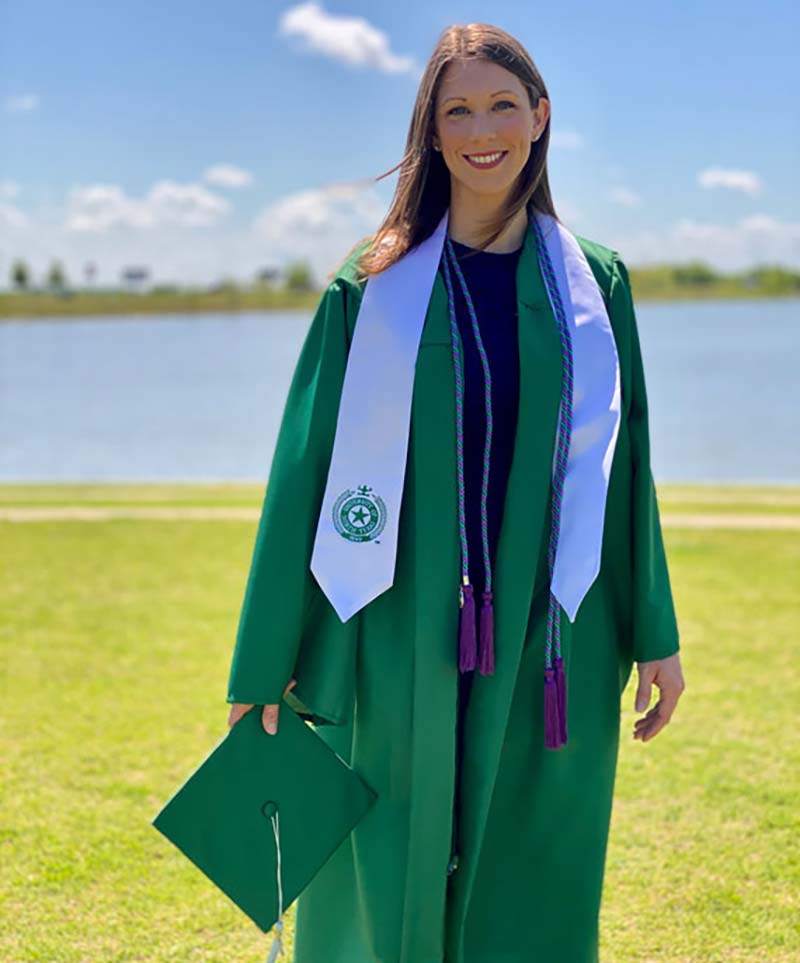 In spring 2004, Jennifer Washam was a community college student when she received a phone call that changed her life.

Her boyfriend, U.S. Army Sergeant Joe Washam, had been badly burned in an explosion while on duty in Iraq. She finished her finals, but then put her education on hold while he recovered in San Antonio.

“Caring for him was my priority,” says Jennifer.

But this spring, she will graduate and fulfill her lifetime dream of becoming an elementary school teacher. During those 16 years, she married Joe, who earned his bachelor’s degree in Applied Arts and Sciences, and she gave birth to their son, Kingsley, now 10. Five years ago, she decided it was time to return to school and finish her degree.

Her path has been unusual and, with the COVID-19 pandemic forcing classes online and commencement in flux, so has her last semester.

“It’s fitting that my whole story has been untraditional,” says Jennifer. “I shook the feeling that I had to do it a certain way. It doesn’t matter if it doesn’t look the way you thought it would. At the end of the day, I’m going to get the chance to impact the lives of children.”

Jennifer, who lives in Justin, chose UNT for its strong education program, and she says her professors in the College of Education understood her journey and worked with her.

Her family also helped out. Joe would edit her papers and Kingsley would help test out her lesson plans.

And now Jennifer is living her dream — she has accepted a position at a local elementary school where she will teach this fall. She has wanted to be a teacher since the first grade.

She advises non-traditional students to pursue their dreams without second-guessing themselves.

“There’s nothing wrong with being selfish when it means you’re taking initiative to do something that matters to you,” she says. 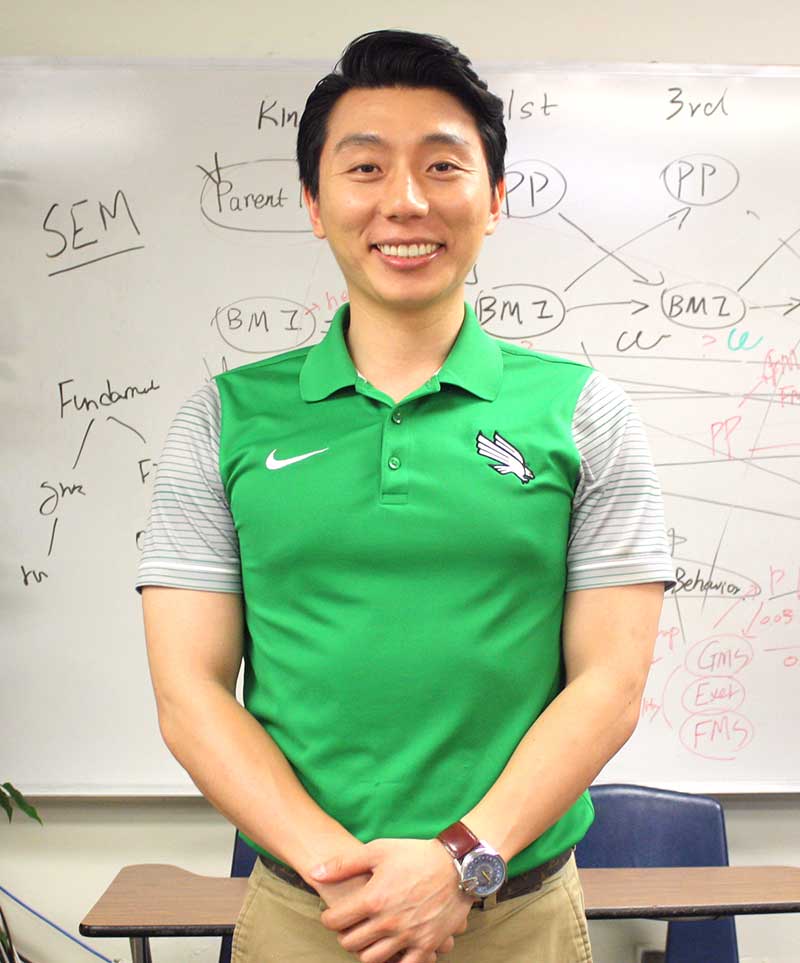 Joonyoung Lee is known as a leader, a mentor and an inspiration by his peers and faculty alike.

A native of South Korea, Joonyoung has helped other UNT international students adapt to university life, serving as an international student orientation leader and mentor. Currently, he is a coordinator for visiting scholars who come from different countries, including 45 scholars from China.

“I am proud to be part of the Mean Green family because of the way UNT cares for the welfare of its students and supports their success,” says Joonyoung. “UNT emphasizes the value of equality and diversity. This means a lot for international students.”

Joonyoung will graduate in May with a Ph.D. in sport pedagogy and motor behavior. He says he has met many great teachers and professors at UNT and they have become his inspiration. It is one of the reasons he wants to devote his life to educating others.

“I have been so touched by the incredible warmth and generosity of faculty and staff in the Department of Kinesiology, Health Promotion and Recreation,” says Joonyoung. “My advisor, Tao Zhang, assistant professor of kinesiology, health promotion and recreation in the College of Education, has greatly influenced my journey also to become a professor, offering me numerous opportunities to build my leadership skills. I want to become a professor like those I have met here at UNT who are not only my teachers, but my mentors and supporters as well.”

As the manager of the College of Education’s Pediatric Movement and Physical Activity Laboratory, Joonyoung is already teaching and inspiring others. He shares his passion for school- and community-based physical fitness with the graduate and undergraduate student research fellows he trains. He says that UNT’s support for students’ research is one of his favorite things about the university and it has allowed him to engage in diverse projects and travel to present his research.

After graduation, Joonyoung wants to make it his mission to help make physical fitness more accessible, especially to children in underserved populations. He also hopes to create community-based physical and wellness programs after the COVID-19 quarantines are lifted.

“There will be concern about people’s physical health with the increased sedentary behaviors and physical inactivity during social distancing,” says Joonyoung. “I look forward to helping develop fitness opportunities for families and children that will continue to benefit their communities well into the future.” 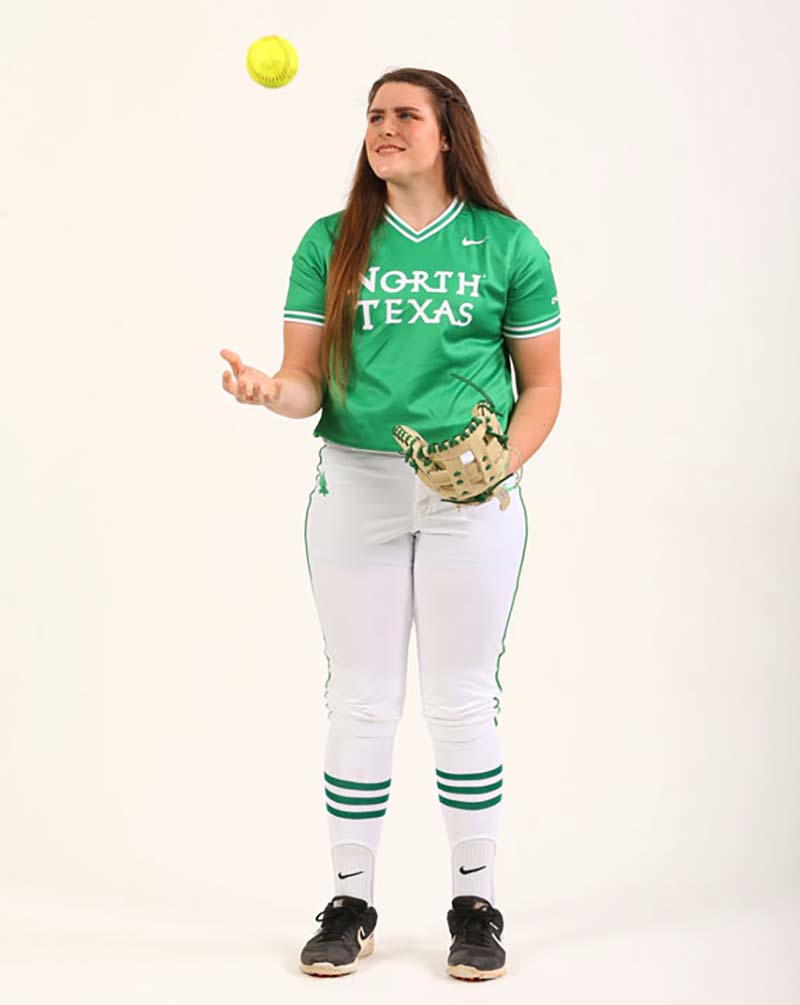 There were high expectations for Mean Green softball heading into the 2020 season. Coming off the first conference championship in program history in 2019, UNT was picked as preseason favorites to win Conference USA.

It would have been the perfect way for senior catcher Nicole Ochotnicki to end her college career. Unfortunately, instead of playing her final game in May, Nicole’s last game in a Mean Green uniform came on March 8, just before the 2020 season was cut short by the COVID-19 pandemic.

“It was really upsetting at first,” Nicole says. “I’m still sad about it, and I miss all my teammates and coaches.”

Even though the team didn’t get to try their luck at the postseason this year, Nicole says they did squeeze in one moment that stands with last year’s championship as one of her favorite memories at UNT – the Mean Green’s first-ever win over the University of Oklahoma on Feb. 29.

“The coaching staff did so well getting us prepared and managing that game,” Nicole says. “It was just a crazy atmosphere because it was in Norman and it was such a big win for our team.”

Although the Cedar Park native would much rather be out on the field than quarantined in her apartment, she says the silver lining is that all the extra time has allowed her to focus more on preparing for physical therapy school.

Shortly after she graduates from UNT with her bachelor’s in kinesiology, Nicole will start PT school at Texas Tech, which she hopes will lead to a career in outpatient, home health or hospital rehabilitation.

“I knew I wanted to major in kinesiology since I’ve been around sports my whole life and I’ve always wanted to help people, so physical therapy is sort of the perfect combination of those two things,” Nicole says.

After her season and senior year were interrupted so abruptly, Nicole hopes future students will make the most of their college experience once life gets back to normal.

“Enjoy college while you can,” Nicole says. “Spend time on campus and go to your classes and just take it all in. Take everything one day at a time and try to appreciate all the little things.” 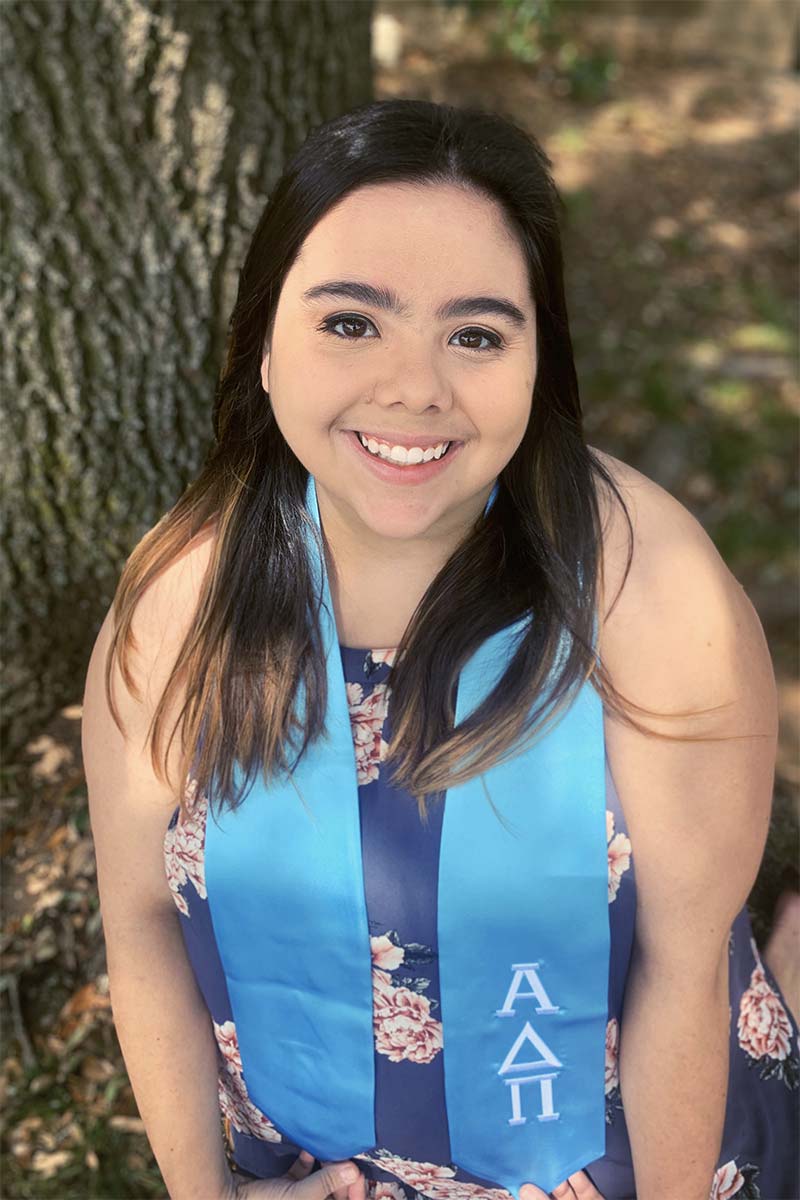 Julia Trotter admits that not being able to have a graduation ceremony due to the COVID-19 pandemic was a blow.

“I wanted to walk across that stage and hear my family cheer my on,” Julia said.

Despite that, Julia said her time at UNT was meaningful to her.

“I love how truly diverse this campus is,” says Julie. “I have never been exposed to so much love and culture in one place. Differences are celebrated here, and that makes a world of a difference.”

The Frisco native first fell in love with UNT during a campus tour with a friend.

“I know I made the right decision coming here,” she said. “I have made lifelong friends and so many doors have been opened for me.”

Julia, who plans to take a break before starting a master’s program, hopes to make a difference in the lives of the students in her classroom.

“I also hope to find new and exciting ways to teach the material,” she said.

Julia knows what a difference teachers can make because one of her professors, Lauren Eutsler, made such a difference for her.

Julia said Eutsler, an assistant professor in Teacher Education and Administration, inspired her to pursue research in education.

“She had a huge impact on my academic career,” says Julia. “I have been able to conduct research with her, write papers and present my research at international conferences.”

Julia hopes that students coming after her will take the time to enjoy all that UNT has to offer.

“I am proud that as a university we continue to strive for bigger and better things continuously,” she said. 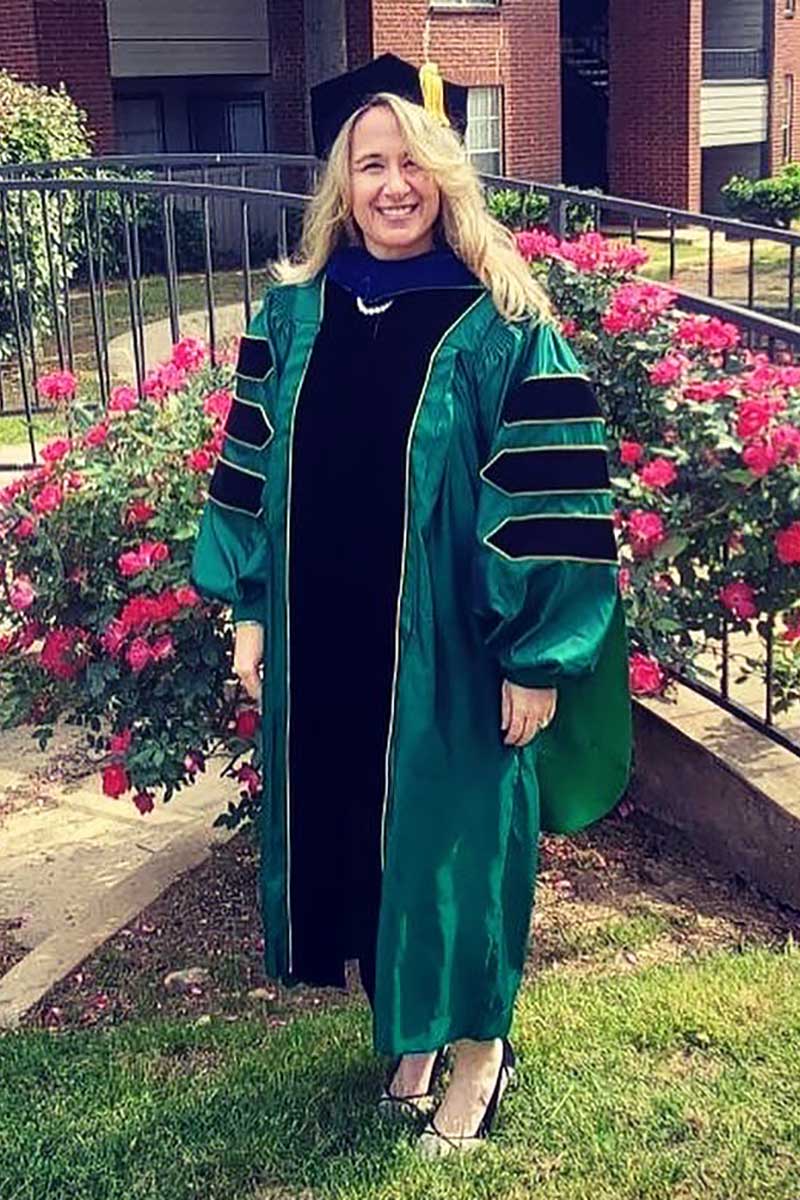 As a non-traditional student starting a Ph.D. program in her late 30s and coming from out of state, Marianna L. Oller said the sense of community fostered in the College of Education’s Counseling Program helped her find her “Texas family” at the University of North Texas.

“Holistically, the faculty in the Counseling Program have been a tremendous source of support,” Marianna said. “My father passed away during my second semester in the program, and the faculty and staff were there for me.”

With her doctorate in counseling, Marianna said she hopes to become an influential counselor educator who positively impacts the lives of disparity of representation of historically marginalized individuals in the areas of representation and higher education.

Marianna said she chose UNT after how welcomed and supported she felt during the interview process and because of a recommendation from a mentor while earning a master’s degree. But she also pointed out one professor in particular whom she said pushed her to grow and challenged her to take risks.

“My major professor, Dr. Natalya D. Lindo has had the greatest impact on me, personally and professionally,” Marianna said. “From the PhD interview process, she has been a warm, supportive, and encouraging presence in my life.”

During her time at UNT, Marianna served on the executive councils for Chi Sigma Iota, Rho Kappa and UNT's Counselors for Social Justice. She also participated as a co-facilitator for the Unlikely Allies series for the Office of Diversity and Inclusion.

“I would encourage freshmen to get involved, take risks to meet new people, and be open to new experiences,” Marianna said.