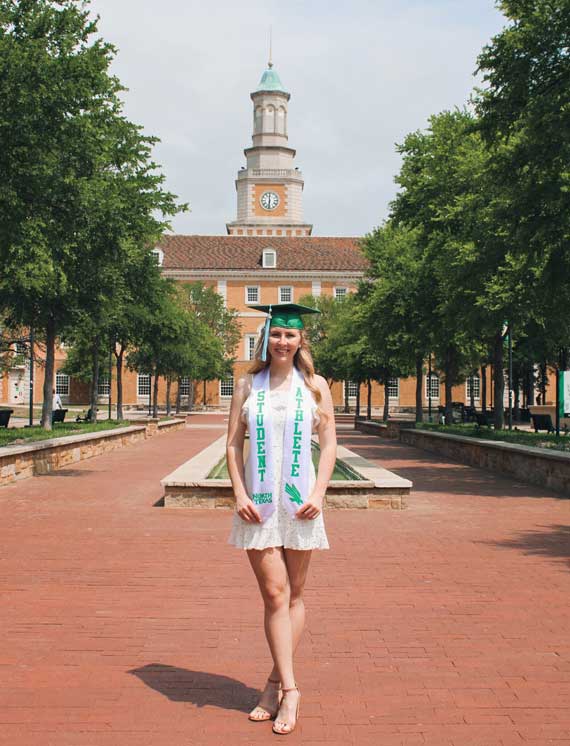 Bump, set, spike — the traditional sequence of most volleyball plays. But what happens when the setter can’t set?

Imagine dedicating nearly 14 years of your life to a sport you are passionate about. Spending over a decade building skills, practicing techniques, earning a place on a Division I college athletics team, becoming captain and then suddenly discovering you have a rare disease that affects your ability to participate.

Eldest of five, Kaliegh Skopal began her UNT journey as a transfer student, continuing her athletic career as an integral member of Mean Green Volleyball. During Kaliegh’s junior year, she began to get a migraine at practice on a road game at Florida International University. After first brushing it off as just a bad headache, Kaliegh noticed it was starting to get worse. As migraines weren’t typical for her, she headed to the hospital to seek treatment. When she was sent back to the team hotel, she thought the issue had been resolved. The next day, Kaliegh noticed a problem with her left eye and her hands had begun to curl and ball up. While this would be scary for anyone, it was especially problematic for this Mean Green Volleyball setter. Unable to tie her shoes, she returned to the emergency room for a series of scans.

Kaliegh’s family was back in her hometown of Round Rock, receiving calls about their daughter’s current state. Kaliegh’s mom, a registered nurse, was doing her best not to alert her daughter of the severity of the problem, as she had a hunch that Kaliegh might have Guillain-Barre Syndrome (GBS). In this rare disorder, the body’s immune system damages nerve cells, causing muscle weakness and sometimes paralysis.

After several scans, tests and examinations by specialists, Kaliegh was diagnosed with GBS.

Rehab, therapy and reconditioning to get the feeling back into her limbs made Kaliegh nervous about returning to campus. What most would consider a simple task, Kaliegh had difficulty in completing herself. Quick to help others, she was scared to ask for help. Seven months passed, and she was approved to return to the court.

Kaliegh’s positive attitude and willingness to step back into the sport were an inspiration to others.

Due to COVID-19 restrictions, the volleyball season was delayed. It was almost a year until Kaliegh could take to the court to play her first post-diagnosis match. With her Mean Green Family’s support , Kaliegh hasn’t let this disease define her. She will graduate with a Kinesiology degree and plans to continue her education at UNT in the fall.

“UNT has brought me more than I could ever imagine — I ended up here kind of on a whim and it was the best decision I have ever made.” 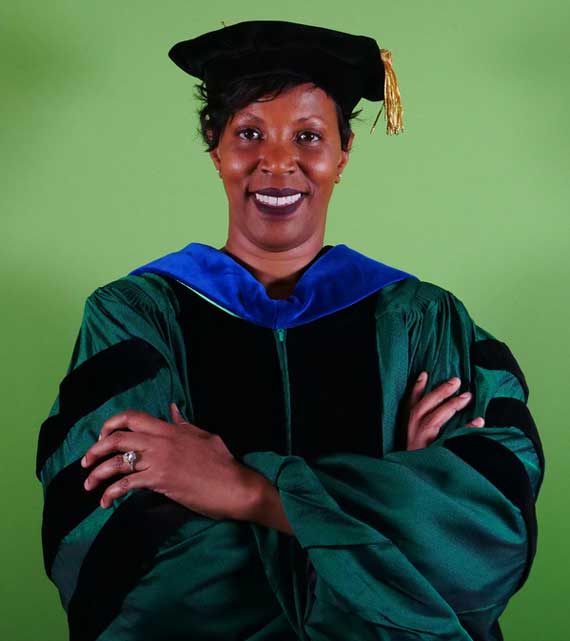 Ph.D. in Curriculum and Instruction

Marquita Foster never wants her students to walk out of her classroom unprepared for the issues they’ll undoubtedly face. As a 23-year veteran of education, she knows there are challenges that are far more complicated — and generally less addressed — than the more common conundrums discussed during educator preparation. After all, she says, education isn’t all tests and tardies.

“We always do these exercises where we talk about real issues — many of my students are on campuses, and they share with me the things they see,” says Marquita, a doctoral student in Curriculum and Instruction who taught courses at UNT such as Teaching Diverse Populations. “I try to be very honest with them about what can be a racist and oppressive policy but doesn’t look like one. We talk about how should they approach this — how do they want to disrupt this?”

That question was at the heart of Marquita’s dissertation, which explored the ways Black educators utilize notions of critical caring and Blackness as a disruptive pedagogy to combat oppressive policies and structures that often crush Black students’ spirits. As a former teacher, instructional coach and assistant principal in area school districts, including Lewisville, Duncanville and Lancaster, she’s seen firsthand the damage deceptively innocuous policies like dress code can do when inconsistently or aggressively applied to Black students.

“I guess all research, in a sense, starts out as personal. But having been in urban, suburban and rural districts, I’ve seen how using some of those very traditional policies that you first learn in teacher prep and then are reinforced in the field can be very demeaning and psychologically damaging, particularly to Black students,” says Marquita, who found many Black educators are confronted with the double consciousness of being both Black and part of a larger organization with policies that aren’t always equitable. How Black educators are asked to do their job, she says, may often put them at odds with culture and require them to enforce oppressive practices. “Many of these policies are putting teachers in the position not to nurture but to control because they have been weaponized to harm students. For example, dress code policies were intended to promote safety, but some teachers may approach dress code as violations or ‘classroom disruptions,’ which leads to disciplinary referrals — instead of giving students the chance to simply fix what’s wrong or consider mitigating circumstances.”

She’s brought that personal experience into the classroom, even drawing on old referrals and paperwork to emphasize the need for disruptive approaches to discipline in the classroom — a student review of her Teaching Diverse Populations class noted, “She taught me more about the education system than I could have ever imagined.”

Now that she’s completed her dissertation, the next step, Marquita says, is looking at teacher preparation programs and what academia is doing — or not doing — to address on a deeper level issues of systemic racism that are found in schools across the country. She also hopes to see more acceptance and support of Black scholars at the Ph.D. level.

“I would love to see more space created for what we’re bringing to programs,” says Marquita, who notes that UNT College of Education professors such as Tran Templeton, Amanda Vickery and Misty Sailors have championed her ideas as a doctoral student and instructor. “When our writing or experience doesn’t necessarily follow the traditional paradigm, we shouldn’t feel as though our expertise doesn’t matter. It should be embraced.”

Marquita enrolled at UNT in 2015 because she had heard great things from many of her fellow educators — once she looked more into the programs and professors, she decided it was the right place to earn her advanced degree. Now that she’s reached the pinnacle of her academic journey — and plans to take a short break following graduation to “catch her breath” before figuring out what’s next — she has advice for those at the beginning of their own.

“When I think back to my undergraduate experience, I didn’t speak up enough, I didn’t use my voice enough, I didn’t fight for what I needed as a scholar,” says Marquita, whose daughter, Ki, is also graduating from UNT this spring with a bachelor’s degree in psychology, and whose son, Kaemon, is a sophomore computer science major here. “You have to learn to tell people what you need and what you want in order to make sure that you’re really learning.” 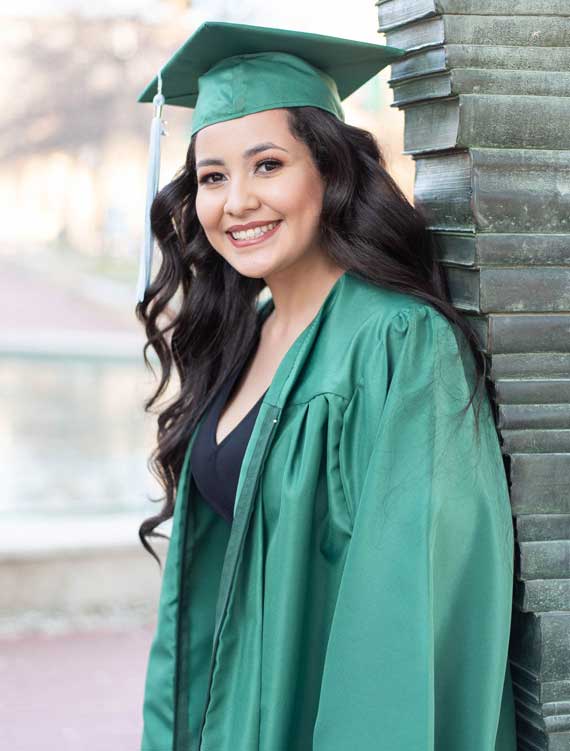 Stephanie Gonzalez wants to make a difference in the communities like the one in Fort Worth where she grew up, encourage others to improve their lives through exercise and be a role model for her three younger siblings. One day she hopes to become a doctor, but she’s already making an impact.

When Stephanie was a senior in high school, she joined the softball team, her first attempt at organized sports. When she saw the difference it made in her life, she decided she wanted to study that connection in college. She wanted to know more about how the body moves in connection with the brain.

“I saw how it impacted me. I was less stressed. I had more energy,” she says. “I’m introverted, so it made me get out of my comfort zone to talk to people and work as a team.”

Stephanie decided to come to UNT to study kinesiology after visiting campus because it felt like home. She liked the diversity. It seemed like a perfect fit for her.

“It’s not too big, and it’s not too small,” Stephanie says. “Everyone has a community.”

Her community is her McNair Scholars cohort and the Pediatric Movement and Physical Activity Lab where she conducts research. One of the few kinesiology majors in the McNair program, she was surprised at just how much she got involved in her research.

“I never thought I’d be so passionate about it,” Stephanie says. “I like to do research and read articles.”

Now, admitted to three graduate programs — including UNT’s Ph.D. program in Exercise Physiology — Stephanie plans to continue studying connections between the body and the brain in exercise. There are many connections she wants to explore. For example, seeing her younger brother struggle to sit still at school has made her interested in looking at how exercise can help kids with ADHD.

“I’m trying to see if I can help him release that energy into something else instead of fidgeting at school because that’s been a problem,” Stephanie says.

She brings a lot of what she learns home to her family, encouraging them to exercise as well. Diabetes and cardiovascular disease run in her family, and she’d like to help them combat that. Likewise, she wants to help improve the health and wellness of her community. Stephanie says she came from a good high school and wants to help make a difference there as well.

“I want to become Dr. Gonzalez to improve low-income communities, such as my own,” she says. “I want to help improve physical activity in high school; I went to P.E. class, and all we did was sit down on the benches and watch other kids.”

Stephanie spent her freshman year working weekends at a restaurant near her home in Fort Worth. Since she didn’t have a car, she would take DCTA’s 64 North Texas Xpress train at 5 a.m. on Mondays to campus for a 9 a.m. class. Once she got a job at the Business Leadership Building computer lab, she was able to participate more in other opportunities on campus.

Stephanie says growing up she didn’t have a lot of role models for success in college. As a first-generation college student, one of the biggest challenges for her was knowing who to go to with questions, not knowing who or what to ask and what resources were available. The McNair Scholars Program and the Professional Leadership Program provided Stephanie with tools for success, but it still took her a while to learn things students from a different background may already know.

“My parents give me emotional support, but when I had a question, it was like, ‘We can't help you. You're in college, you have to find that out yourself,’ Stephanie says. “I want to be a role model for my siblings, so they don’t have to struggle as freshmen.”