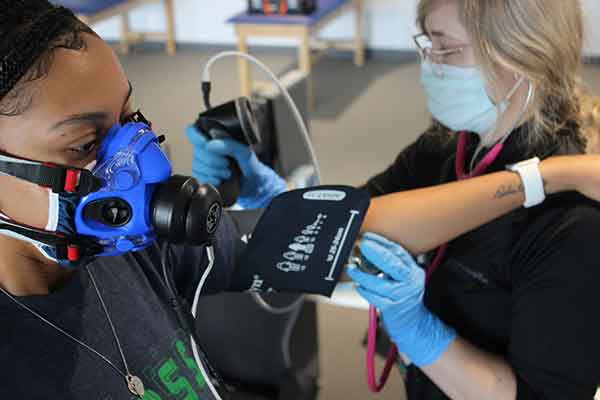 A student's heart rate, blood pressure and oxygen is evaluated following exercise as part of a study into the impacts of wearing a cloth mask while exercising.

DENTON (UNT), Texas — Exercising while wearing a cloth mask may lead to more work, heavier breathing and faster fatigue, according to a joint study between the University of North Texas and Baylor Scott & White Sports Therapy & Research at The Star in Frisco.

“It’s one of the first studies to look at what wearing a cloth mask does when exercising,” said Jakob Vingren, professor and chair of the UNT Department of Kinesiology, Health Promotion and Recreation. “The study examined the recreational exerciser and how mask wearing impacts exercise performance. The study discovered that the results also apply to those who have physically demanding jobs. It has broad implications, as billions around the world continue to wear masks.”

The data from this randomized controlled trial, conducted through Baylor Scott & White Research Institute, has been published in the British Journal of Sports Medicine and shows that participants who wore cloth masks during exercise experienced a reduction in performance as intensity levels increased compared to when not wearing a mask.

"We wanted to contribute to the scientific evidence base, and our data suggests that while exercising with the mask, participants were working harder, breathing harder and their bodies were getting less oxygen – leading to quicker fatigue," said Simon Driver, PhD, principal investigator and research center director at Baylor Scott & White Sports Therapy & Research.

Vingren, along with UNT Regents Professor David Hill, helped Baylor Scott & White researchers in designing the research, as well as analyzing and interpreting the data.

During the trial, participants completed a graded-treadmill test which increased in speed and incline every three minutes while wearing a performance assessment device that measured metabolic parameters such as oxygen uptake, carbon dioxide production and respiratory rate and volume. The researchers recorded participants' respiratory and cardiac parameters during and after the test. The sample consisted of 32 young and healthy participants (55% male; mean age of 23 years) who completed two cardiopulmonary exercise tests on the treadmill approximately eight days apart, one of which was conducted wearing a two-layer polyester/elastane cloth mask and one conducted without a mask. The study's key findings determined:

“If I was to go to a gym, I would wear a mask. It does lower your ability to exercise,” Vingren said. “As much as it may seem obvious, this study now offers data-focused evidence as to why it’s harder to do physical tasks with a mask.”

The research team believes that future investigation is warranted to understand the impact of wearing a face mask on patients and healthcare workers as well the impact of face masks on cognitive performance at different intensities of exercise.

This study was made possible through funding by the Baylor Scott & White – Dallas Foundation and through a collaboration with Sports Academy at The Star.