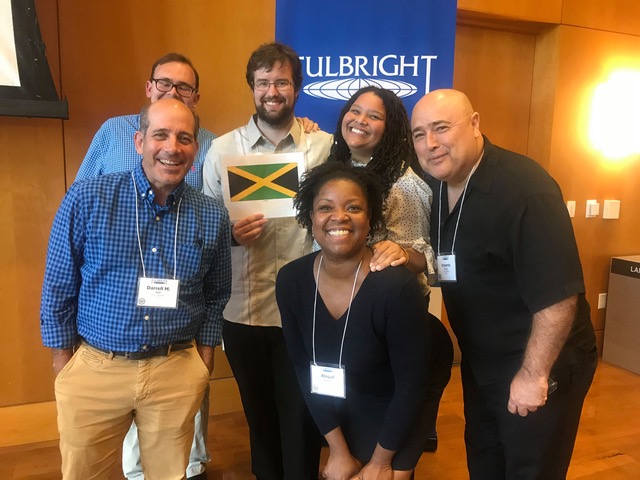 The tiny island nation of Jamaica recently had cause for celebration after its Prime Minister Andrew Holness announced the nation’s jobless rate hit a record low of 9.6 percent at the end of January.

But the county of 2.9 million people living in an area smaller than the Dallas-Fort Worth metroplex continues to struggle with an ongoing problem — the approximately 140,000 “unattached” youth, who are not in school, are unemployed and are not participating in any training program. Numbers reported at the end of this year’s second quarter show “unattached” youth comprise about 30 percent of the total youth population and have the highest unemployment rate at 22 percent.

“This happens all over the world, but especially in developing nations,” said Darrell M. Hull, associate professor in the UNT College of Education Educational Psychology department.

Hull, who spent time in Jamaica about 10 years ago conducting a randomized trial study for a government program working with unattached adolescents, was recently named a Fulbright U.S. Scholar Program award winner. He will be traveling back to Jamaica next year to conduct research and lecture at the University of the West Indies – Mona Campus. Part of his work there will be measuring the long-term outcomes of a program designed to address youth that are not working or in school, and examining the psychometric validity of measures used to assess youth in developing countries.

Building on the idea of positive phycology, the Jamaican government created rural camps 10 years ago where young people participated in a 30-day training program followed by a six-month internship. Hull’s work then looked at how that program impacted the participants at the time.

“What we found was it was having a moderate effect on these kids work skills and self-efficacy, but it wasn’t helping their social-emotional outcomes,” Hull said.

Hull plans to follow up with about 40 of the young people who participated in the program 10 years ago to see if it had a lasting impact on their lives. He will also be working with faculty at the University of the West Indies to adapt a measure referred to as the Five Cs of Positive Youth Development to the Jamaican culture and seeing if it measures things the same way it does in the U.S. culture where it was developed.

Hull is one of more than 800 U.S. citizens who will teach, conduct research and provide expertise abroad for the 2018-19 academic year through the Fulbright U.S. Scholar Program. Recipients of Fulbright awards are selected on the basis of academic and professional achievement as well as a record of service and demonstrated leadership in their respective fields.

Professor Robin Henson, chairman of the UNT College of Education Department of Educational Psychology, said being selected as a Fulbright Scholar is rare.

“It’s quite an honor for Dr. Hull to be selected to pursue his research and teaching in Jamaica, and it speaks to the quality of his research and grant evaluation experience in cross-cultural settings,” Henson said. “He has been doing research in the Caribbean for a long while now, and this recognition is a reflection of that record.”

While Hull says he is looking forward to the four-month trip starting in January and working in Jamaica with his wife, a licensed clinical social worker, it’s not a resort vacation. Hull expects they will be living in university housing in Kingston during the trip.

“It’s not the garden spot of Jamaica. We’re not going to be living on the beach,” Hull joked.

The Fulbright Program is the flagship international educational exchange program sponsored by the U.S. government and is designed to build lasting connections between the people of the United States and the people of other countries. The Fulbright Program is funded through an annual appropriation made by the U.S. Congress to the U.S. Department of State. Participating governments and host institutions, corporations and foundations around the world also provide direct and indirect support to the program, which operates in more than 160 countries worldwide.

Since its establishment in 1946 under legislation introduced by the late U.S. Sen. J. William Fulbright of Arkansas, the Fulbright Program has given more than 380,000 students, scholars, teachers, artists and scientists the opportunity to study, teach and conduct research, exchange ideas and contribute to finding solutions to shared international concerns.

Fulbright alumni have achieved distinction in many fields, including 59 who have been awarded the Nobel Prize, 82 who have received Pulitzer Prizes, and 37 who have served as a head of state or government.